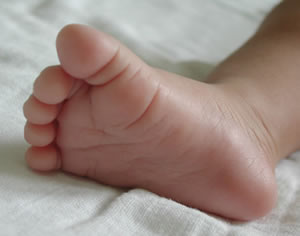 Flat feet in children can be difficult to notice when they are first born, since baby fat often hides the true shape of the foot.  As months go by and the baby enters walking stage, the condition becomes more obvious.  As a child ages, a normal arch should appear between the ages of four to six, as it is often developed by walking barefoot on uneven terrain, which develops muscles, tendons and ligaments.  If a normal arch doesn’t occur during this stage of development, then it could become necessary to look into the use of orthotic solutions to keep back or lower extremity problems from emerging later.

You can test whether an arch is developing by using a wet blotter, where you make a footprint of your child’s damp foot on colored paper, and check whether the footprint leaves a visible gap left by the foot arch.  You can also do this on a beach or in a sandbox by looking at the foot impression, though the blotter test is much more telling. Another sign of flat feet is when the child complains about his or her calf muscles or ankles aching after walking for a period of time, as flat feet in children can cause additional strain on ankles and calves to compensate for the lack of foot arches. Sometimes a child may walk on the outer edges of his feet, and this is sometimes mistaken for bowlegged-ness, when it is really a result of over-pronation caused by flat feet.

Pronation –the excessive rolling inwards of the ankles and feet and resulting collapse of the arches– is found in up to 70% of the population. Over a period of time, excessive pronation in addition to foot pain will also cause back problems, in addition to leg and foot problems.  Many people do not realize how proper foot, leg and back alignment are connected, and it is important to remedy any foot problems, such as flat feet in children or adults, to prevent further damage to other lower body parts.

It is advisable to become aware of flat feet in children as soon as possible to prevent the resulting problems later in life.  While sometimes it is a normal part of aging, it is possible for adults of any age to develop flat feet.  It may be caused for a reason such as injury, illness, or pregnancy, and can be temporary or permanent, depending on the reason. Excessive weight-bearing in adults or children can also cause flat feet.

Flat feet in children can be corrected and further damage to ankles, calves, or lower back prevented through orthotics. A podiatrist should be able to analyze the symptoms and recommend appropriate treatment, which could include arch support, orthotics or foot exercises, depending on the severity of the problem. There are many orthotics products available on the Internet, without the need for expensive custom-made orthotic insoles or other aids.

The most important thing to keep in mind when it comes to flat feet in children is that early detection can prevent many serious complications to other body parts, such as the lower back, later in life. It is easy to treat flat feet in children and adults and pronation through readily available and affordable orthotics products.

Footminders Kids orthotic insoles were ranked as one of the best shoe inserts for flat feet on Ode Magazine.

Comments will be approved before showing up.

Orthotics Treat Pain From the Leg Up

Your foot, knee, back, ankle, and other pains could be treated by a simple orthotic. Read on and see how a foot insert can help.

The post Orthotics Treat Pain From the Leg Up appeared first on .

In today’s age, we have seen more and more knee-related pain than before. Why is that? Physicians theorize that today’s modern lifestyle of staying indoors, a sedentary lifestyle, and lack of exercise prevents the knees from remaining strong. The possible weight gain due to this issue can help contribute to the stress on the knees. […]

The post Knee Ailments Increase Due to Modern Lifestyle appeared first on .

Life can be difficult if you are suffering from joint pain. Moving can hurt, but it turns out that not moving can hurt things more. Doctors recommend that sufferers of joint pain should do gentle, targeting workouts in order to strengthen the joint and the muscles around it that can support it. For a full […]